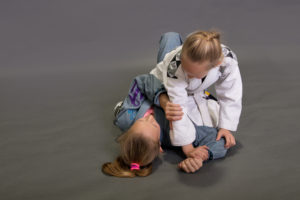 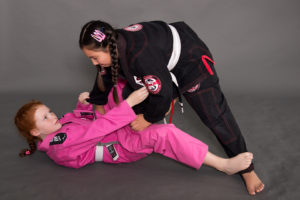 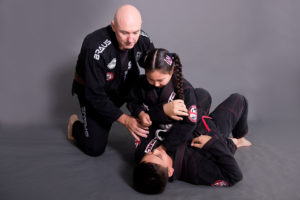 Most Martial Arts programs rely on striking the attacker with the use of punches, kicks, knees and elbows. The unique thing about our Kids BJJ Program is all the techniques are purely defensive and utilises no strikes. We teach the children the skills, if attacked to defend themselves and the techniques to neutralize the threat and gain control. Our children’s BJJ Program can prepare your child to deal with many challenges and obstacles that they may deal with in day to day life e.g. bullies; it will also instil in your child the character traits that will lead to success in all areas of life.

The Kids Brazilian Jiu-Jitsu program is for both boys and girls ages 5-13 years old. The program is designed to improve overall fitness while providing the benefits of learning a martial art. The curriculum will cover basic and effective self defence techniques tailored specifically for children. Emphasis is also put on developing confidence, respect and a good work ethic. All classes are supervised by an adult in a friendly and safe environment.

A typical class usually consists of a warm up, which includes physical exercise, and BJJ oriented movement drills. After a quick break, the instructor demonstrates the technique(s) of the day. Students then practice the technique(s) on the instructors and then with a partner. The next portion of the class is dedicated to active practice tackling the giant (5 to 8 yrs group). Then the last few minutes of the class is when the student gets to wrestle their friends (Rolling). Students routinely experience the fun of rolling with an instructor as they develop their skills and confidence.

While classes are run in a disciplined manner, we strive to create a positive environment for kids to learn in. Our goal is that each child has increased confidence and a smile on their face at the end of every class!

Why should Kids learn Brazilian Jiu Jitsu? ( 5 yrs to 13yrs)

It is a non-violent yet effective and complete self-defence system.

Many parents want their child to learn a martial art in order to defend herself/himself against bullies or unwanted strangers. Having a safe and foundational system of self-defence is the key to children feeling confident about defending themselves if needed. Because it is completely based in leverage and submission, BJJ techniques actually give the smaller opponent an advantage.

Unlike most martial arts, which are unnecessarily violent, we do not use any punches or kicks. Instead, we teach the children to use leverage to establish control over the bully until help arrives. Once a child learns these techniques, they no longer have to live in fear, and the increased confidence this gives them is the single most effective deterrent to bullies.

The Benefits of BJJ

Brazilian Jiu Jitsu uses the principles of action – reaction, leverage, and base. Children learn to use an opponent’s power as an advantage, rather than fighting against the force. We practice many different games that help children experience these principles and learn to understand how to use them as techniques. Children develop a heightened sense of body awareness and coordination, which leads to self-confidence and inner discipline. Not only do children learn how to effectively defend themselves, but also strengthen their kinaesthetic abilities to excel in any other sport of which they participate.

The majority of class time involves working in partners and practicing the application of moves. This constant close contact allows practitioners to ingrain the natural phenomenon of body action and reaction to leverage and balance in an interactive way, rather than individual repetitious moves in theoretical scenarios. Children learn to read and anticipate an opponent’s movements, and respond accordingly. They actually experience the dynamic constantly and it becomes hard wired into their body memory.

Some positions in Brazilian Jiu-Jitsu