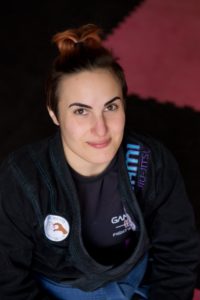 Tina began my BJJ journey because she needed an outlet in life and wanted to learn something that was wrestling based.

BJJ has brought her many great times and has helped me overcome some very difficult times in her life. It has even helped her through her learning difficulty and dyslexia.
Tina has been doing BJJ for 7 years now and has changed and grown in so many positive ways on and outside of training.