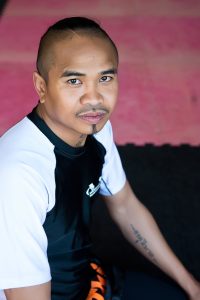 Kiw Jarupa is Head Caoch in Muay Thai Kickboxing at Wickham’s Martial Arts and has had over 300 fights. He has trained many professional and amateur fighters. Kiw has had fights in the famous Lampinee Stadium in Bankok and number of champion belts to match. Kru Kiw’s position at the centre is to teach Muay Thai and his goal is to share his knowledge and passion for Muay Thai to the students. Kiw has travelled to Malaysia and other parts of the world as a trainer and fighter.

Kiw has been training and fighting from an age of 8.

Some big name fighters he has trained are as follows.